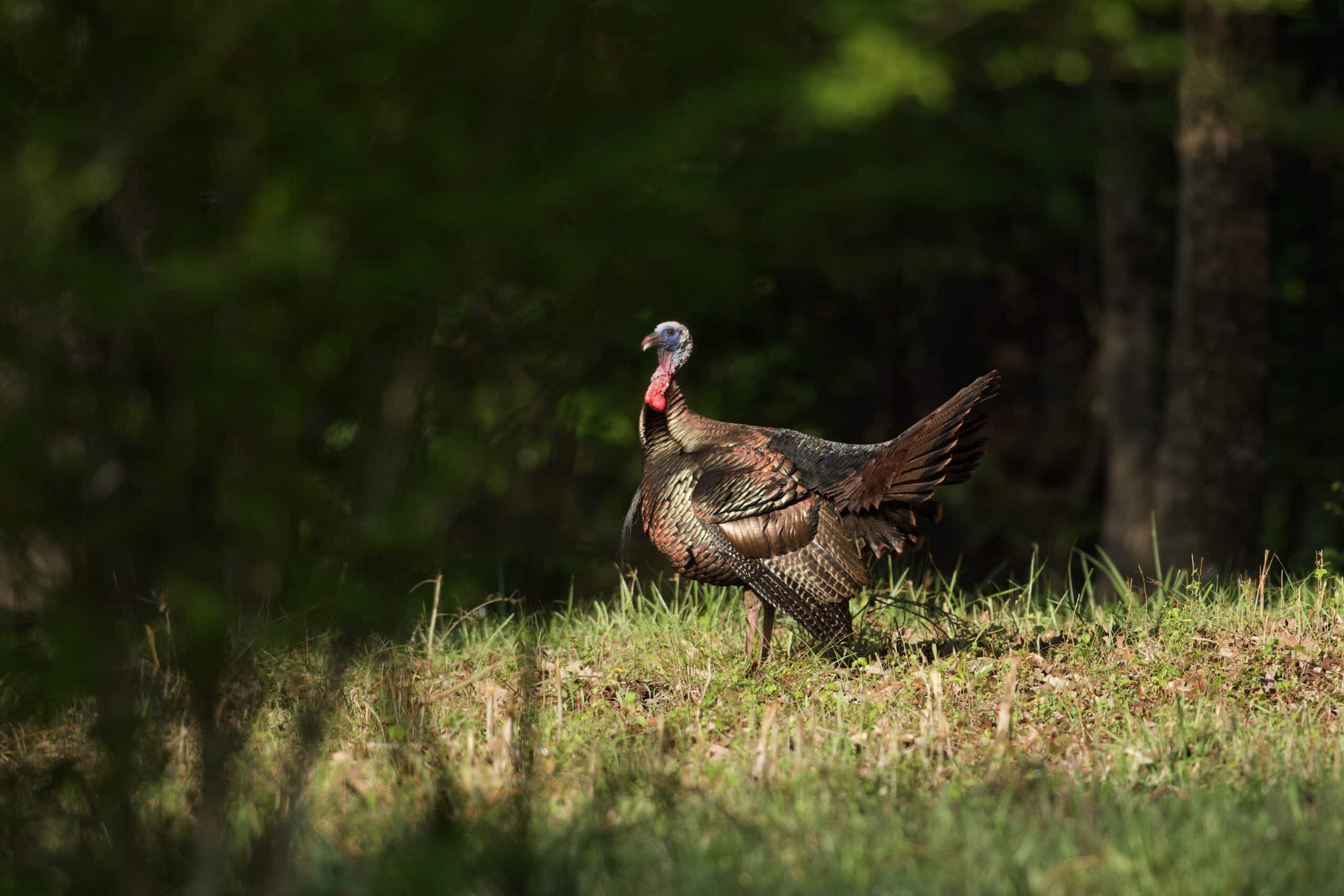 Most turkey hunters know the comeback story of the wild turkey. From a scant few thousand birds nationwide, numbers increased to nearly 7 million. However, in the early years of this century, that meteoric rise peaked in many regions. Most turkey biologists agree we’re now down to somewhere around 6 million birds nationwide. Maybe fewer.

That’s still a lot of turkeys, but the trend is troubling. Maybe it’s simply one of those down cycles that happen to ground-nesting birds. Maybe it’s something else.

Whatever, we need to get a handle on it, and soon.

Shortly after the 2020 spring turkey season, a dozen veteran, hard-core turkey hunters gathered at a hunting lodge in the Alabama Black Belt to discuss this disturbing phenomenon. Collectively, they brought 500 years of turkey hunting experience and observation to the table.

Here are a few of the factors discussed in that meeting:

But an even bigger factor is the fact that urban sprawl continues to gobble up wild places.

Once a tract of ground is converted to subdivisions, shopping malls, superstores, highway bypasses and cloverleafs, that land is gone forever as living space for wild things. None of these projects by itself would be significant, but accumulatively, it’s a different story. The death of ten thousand cuts, landscape version.

This is probably inevitable since the U.S. population is continuing to grow. It’s a head-scratcher, but it’s still a problem.

The numerous bad hatch years that preceded 2020 have really impacted turkeys, especially in the southeast and Midwest. The ultimate cause has been wet, cool springs, and there’s little we can do about the weather.

But there’s a factor we do have some control over. Providing properly interspersed optimum nesting cover would help protect turkey nests and poults from spring rains. A hay field might offer concealment from predators, but it does little to help a hen keep chicks dry in a thunderstorm. The sad fact is, hay fields are exactly where a large percentage of turkey hens nest these days. It’s not optimum, it’s just the best they have available. And even though they may be relatively safe from predators, many nests are destroyed each year as farmers cut hay in May and June.

Scattering a dozen five-acre blackberry, sumac or honeysuckle thickets – or any similar plant that has leaves – throughout a square mile of otherwise decent turkey country would go a long way to mitigate the negative effects of a cold, wet spring.

Predation is seldom a problem in excellent habitat, but when habitat is less than ideal, predation becomes a significant factor. That’s been amplified by recent events in the international fur market, which pretty much imploded in 2013. Trapping activity decreased dramatically. Predators increased. So did predation on turkeys.

Sure, turkeys have co-existed with predators since they first evolved. They’re not going extinct because fur trapping has virtually ceased. But an increased predator load is a significant factor, especially when piled on the other things discussed here. It’s a lot easier for a fox or coon (or snake or crow or packrat) to find a turkey nest in a fence row than it is for that same egg-eater to find it in one of those five-acre blackberry/sumac patches mentioned earlier.

Inappropriate controlled burning. Spring/summer burning is becoming more and more popular on state, federal and large corporate woodlands. Most turkey biologists argue that the benefits of warm-season burning outweigh the loss of any turkey nests or poults, but if even one nest or clutch of poults is lost to a warm-weather burn, that’s a loss that could have been avoided if the burn had occurred in January, February or even March, before nesting and brood-rearing started. Warm-season burning resets the vegetative clock and removes both cover and insects at the very time poults need them most.

Another negative factor is the size of these burns. It’s cheaper, cost-per-acre, to burn one 5,000-acre block of timber than 10 separate 500-acre blocks. It’s also cheaper, and faster, to scatter small incendiary bombs (known as “ping-pong balls” by forest workers) by helicopter over the whole area at once than to use feet on the ground and drip torches.

But if you want to improve conditions for wildlife as well as reduce the fuel load, some compromise is in order. Smaller burns are wildlife-friendlier than big ones. A backfire moving slowly across the woods gives animals time to get out of the way, as opposed to carpet-bombing with walnut-sized fire starters that can completely surround critters and give them nowhere to flee.

Not burning at all. This one’s almost as bad as inappropriate burning; it just takes longer for the undesirable effects to show. Fuel buildup is one; it increases the chance for devastating wildfire. Dense understory brush is another. Large brushy areas with few or no open, brush-free areas are bad for turkeys and most other wildlife. Private landowners need to use appropriately-timed burns to make their woodlands better for both wildlife and timber production.

Fertilizing pastures and croplands with poultry litter. Most poultry houses use rice hulls, wheat hulls, sawdust, peanut shells or similar organic materials for floor litter. Combined with the waste it’s there to absorb, it’s an extraordinarily rich fertilizer. And it has to be disposed of. Some poultry growers spread the stuff on their fields. Some sell or give it by the pickup load to gardeners or neighbors. It’s a potential pathway for introducing disease into wild turkey populations. There are many alternative ways to dispose of poultry litter.

Baiting. It’s not a good idea with deer, wild turkeys, or any other species. Most baiting/feeding is done with corn, and most so-called “deer corn” is either uncleaned or has failed to pass tests for human consumption.

Uncleaned corn often contains cockleburs and other undesirable plant seeds. It also often contains aflatoxins, a group of poisonous carcinogens produced by molds commonly found in stored grains. Aflatoxins are rough on pretty much everything that walks, crawls or flies through the air, so that’s one huge reason not to feed corn to wildlife.

Another reason: putting up feeders causes an artificial situation where wild critters come into much closer and more prolonged contact. Just as contagious human diseases are spread more easily in crowds, so are wildlife diseases.

Also, feeders create easy hunting for predators. All a coyote or bobcat needs to do is lie in wait until something tasty shows up. Don’t think for a minute coyotes and cats aren’t smart enough to figure it out.

Skilled but unlawful and/or unethical hunters. Turkey hunters are not all of sterling character.

Some hunt before and after season, hunt over bait, roost-shoot turkeys, fail to tag and register their kills, and trespass.

Sadly, many of these outlaws are also skilled turkey hunters, so they’re pretty efficient in their outlawing. Even though their illegal activities may be common knowledge, nobody wants to be a snitch so nobody reports them. And few of us even bother to exert peer pressure on the outlaws, even though their activities hurt us all.

We need to stop feeling that way. You’d turn in a bank robber or a car thief, so don’t feel guilty about dropping a dime on a poacher. Likewise, don’t be afraid to tell them you think they’re despicable.

Where Do We Go From Here?

A turkey hunt without the possibility of a kill would be about as much fun as prepping for a colonoscopy. Still, there’s much more to it than pulling the trigger, and we must start communicating that.

Every turkey hunter loves to kill a big gobbler. We’d be lying if we told you otherwise. But maybe it’s time to pull back a little.

Try to discipline yourself to pass up those iffy shots. Pattern your shotgun until you know the range where it loses punch or pattern, then resist those hopeful but low percentage shots out there on the ragged edge. Likewise, don’t shoot if there’s brush in the way. Don’t body-shoot turkeys. Don’t shoot them flying, either, because you’re mostly shooting them in the ass and you’re not likely to kill one that way. More than likely, they’ll get away crippled, and a crippled turkey is very often a dead turkey and therefore a wasted one.

Just doing those four things would vastly reduce the number of escaping cripples. Turkeys are too valuable for that. Letting a turkey walk feels awful, but watching a cripple fly off with a leg dangling feels awfuller.

Another thing we can do is to individually educate our fellow turkey hunters. If you know somebody who’s struggling, or who isn’t showing the proper respect to the bird, to other hunters or to turkey hunting in general, then do something about it. Make a friend, not an enemy. Have a quiet, non-confrontational conversation about doing things right. Better yet, invite the transgressor or rookie to go hunting with you, and teach by example.

One more thing we can do as individuals is give something back. Take part in wildlife agency surveys. Volunteer for habitat improvement projects. Put in a food plot or two if you have land for it, or help a friend with his. In other words, get off your butt during the off season and go do something. You’ll feel better about yourself, and you’ll be doing your part to reverse this trend.

And make no mistake, we can reverse it. Bad weather is largely beyond our control, but we have a lot of influence in other areas if we’ll just use it. We’ve brought turkeys back once already, and they were a lot farther down the slide then than now. For the past 120-odd years, since we woke up, hunters have always been wildlife’s greatest ally.

That hasn’t changed. Let’s all roll up our sleeves and make it happen again.

2 thoughts on “Status of the Wild Turkey, TFT Thoughts”