In June, 2020, twelve men and two women met at White Oak Plantation in Alabama to discuss what they perceived as an alarming trend and the decline of wild turkey populations in the areas they hunted across the United States. At the end of that meeting it was apparent that there were more questions about this problem than answers. Over the next several months the group dug deeper into the issue and decided turkey hunters were key to answering these questions.

In February, 2021, the group received its non-profit 501C3 status and Turkeys For Tomorrow was born. Each of the original 14 members contributed $300 each for the initial funding of the organization. Lofty goals of five research projects in five states in five years and 80% of income dedicated to wild turkey research were adopted.

Today, TFT is 18 months old. We are currently funding six research projects in three states with pending project announcements in two more states. The current average of income dedicated to reversing the decline of wild turkeys is over 80% of funds generated.

The mission of Turkeys For Tomorrow has not and will not change. We are dedicated to reversing the declining wild turkey populations across the United States… Nothing more, nothing less. Research is the foundation on which we hope to build our success. Currently we are working with Auburn University, the University of Georgia, Tennessee Tech and Mississippi State University. We are working with the state agencies of Alabama, Mississippi and Kentucky.

Most importantly, we are working with hunters. Hunters are the real heroes in one of the greatest conservation success stories ever told, the comeback of the wild turkey. Through the purchase of hunting licenses and dogged determination of state agencies and wildlife professionals wild turkeys were brought back from the brink of extinction. We are nowhere near that disaster today but the trend is alarming and Turkeys For Tomorrow is ringing the bell. We need your help. Join Turkeys For Tomorrow at a level meaningful to you. Follow us social media and tell your friends about us. It will take all of us to turn this around. Join Turkeys For Tomorrow and help us help wild turkeys. 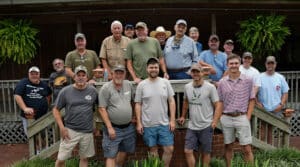